What to consider when terminating a contract 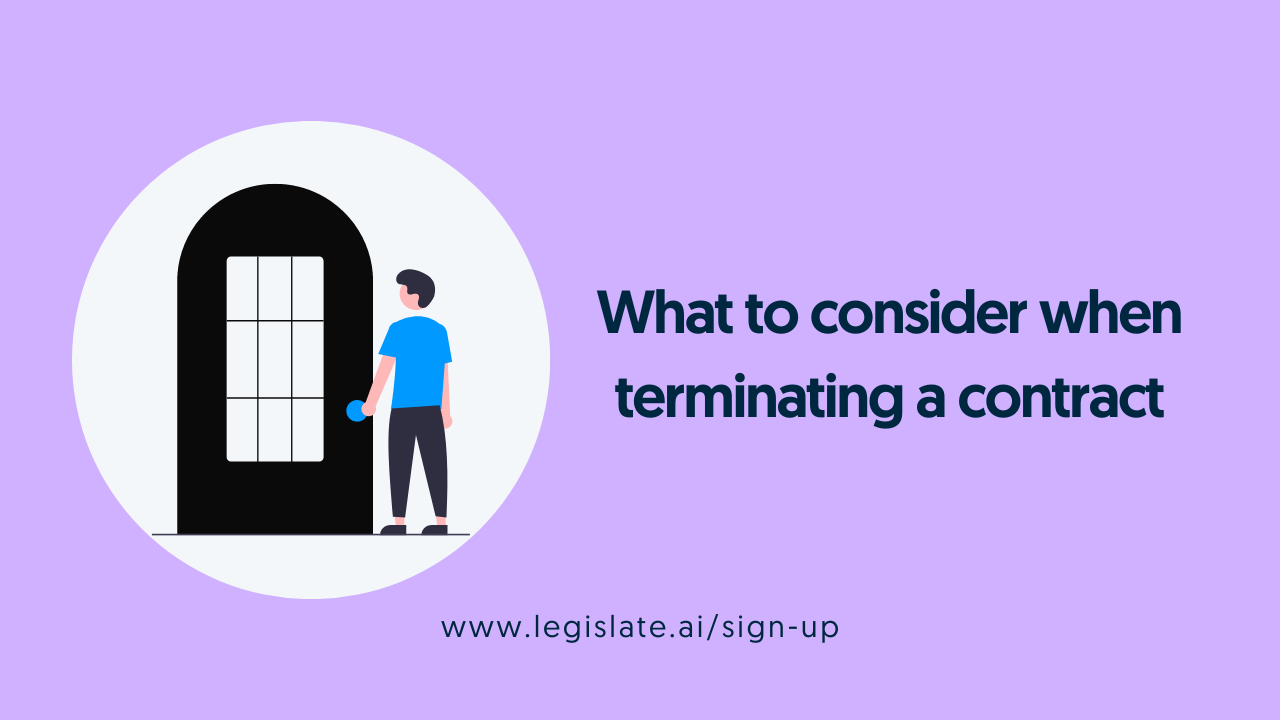 Terminating contracts is not the first thing you usually consider when entering into new agreements but it is worth anticipating in the event you need to. A contract may be terminated for different reasons and under certain conditions based on the nature of the agreement or the circumstances of the termination. This article will provide a framework for approaching the termination of a contract which covers all the necessary steps from reviewing your considerations to satisfying your post-termination obligations.

What contract are you terminating?

Can you terminate the contract?

When terminating a contract it is critical to determine if you can end it in the first place. A contract will usually have a cancellation or termination clause which will detail if, when and how you can terminate the agreement. For example, a 6 month assured shorthold tenancy agreement converting to a rolling periodic can’t be terminated during the 6 month initial term by either party but can be terminated afterwards by the landlord or tenant serving a notice. A contract without termination provisions will simply lapse till the end of the term but it might be possible to negotiate an early termination with the other side. However, this option will only be available if the other side is willing to negotiate and you may be liable for early termination damages.

Which breaches can lead to a termination of the contract?

Contracts can also be terminated because of a breach of contract. In this case it is important to understand the extent of the breach of the contract, collect evidence which can be used to claim damages or take the other side to court. For example, a misrepresentation of one the contract parties can lead to the cancellation of the agreement via rescission. A repudiatory breach will give the right of termination to the innocent party and a material breach will render the performance of the contract impossible. Contracts with a force majeure clause can also be terminated if the conditions of the force majeure have been met and if the contracting party is not able to deliver on the terms of the contract.

Is there any confidential information involved under the terms of your contract?

Will you have future relations with the other party?

Commercial contracts are sometimes terminated to make way for new agreements with the same party. For example, the confidentiality provisions in an employment contract will supersede the non-disclosure agreement an employee might have signed as part of the interview process. A trial agreement can be converted into formal commercial agreement ahead of schedule if the concept has been proven and it makes sense for both parties to accelerate the relationship. If there are going to be future relations it is therefore worth considering whether the existing contract needs to be terminated or if it can simply be amended or superseded to make way for the new agreement. This approach can facilitate a smooth transition to the new contractual terms whilst making sure that the relation and obligations are always protected by a contract.

How to terminate your contract?

Once you have decided that it is necessary for you to terminate your contract, you need to follow a process to formally end it. The termination clause in your agreement will detail the conditions and procedure for ending the contract which will usually involve giving notice to the other party. The duration of the notice and how it needs to be served will vary depending on the nature of the agreement but ultimately it will need to be sufficient to give the other side enough time to make the necessary arrangements on their end to manage the termination. For example, senior employees will have longer notice periods because the employer will need to guarantee there is a suitable replacement and the handover is done properly. If your contract does not contain a termination clause or you are technically not allowed to end it, you can try to negotiate some form of settlement with the other side to release you from the contract. For example, a landlord might permit a new tenant in a HMO to leave during the initial term if there is a fall out with the other tenants and a resolution is not likely to occur. If ever the termination is disputed, the case might go to arbitration or litigation.

After terminating the contract, the involved parties will need to make sure that they satisfy any post termination obligations they may have. This can mean protecting confidential information and returning originals and copies to the disclosing party. A tenant may need to return the keys of the property and provide a forwarding address to the landlord at the end of the tenancy. An employee may need to return any equipment owned by the employer. Finally, when possible it is best to end an agreement on good terms as you never know if or when you might have future relations with the other side. It is also important terminate contracts correctly and in the right conditions to avoid claims of wrongful termination by the terminating party or claims of a serious breach of contract terms which will lead to a costly dispute resolution process which can last several years.

In this article we have provided a framework for considering and terminating a contract. Having the right clauses in your agreement can make contract terminations smoother and protect the parties by requiring post termination obligations. Formalising the termination process in your agreement provides more transparency and removes potential challenges. Finally, terminations can also be agreed outside of the scope of the contract but the outcome and potential settlement will depend on the willingness of the other side to negotiate. To create fair contracts which clearly define the process for terminating a contract, try Legislate.

The opinions on this page are for general information purposes only and do not constitute legal advice on which you should rely. 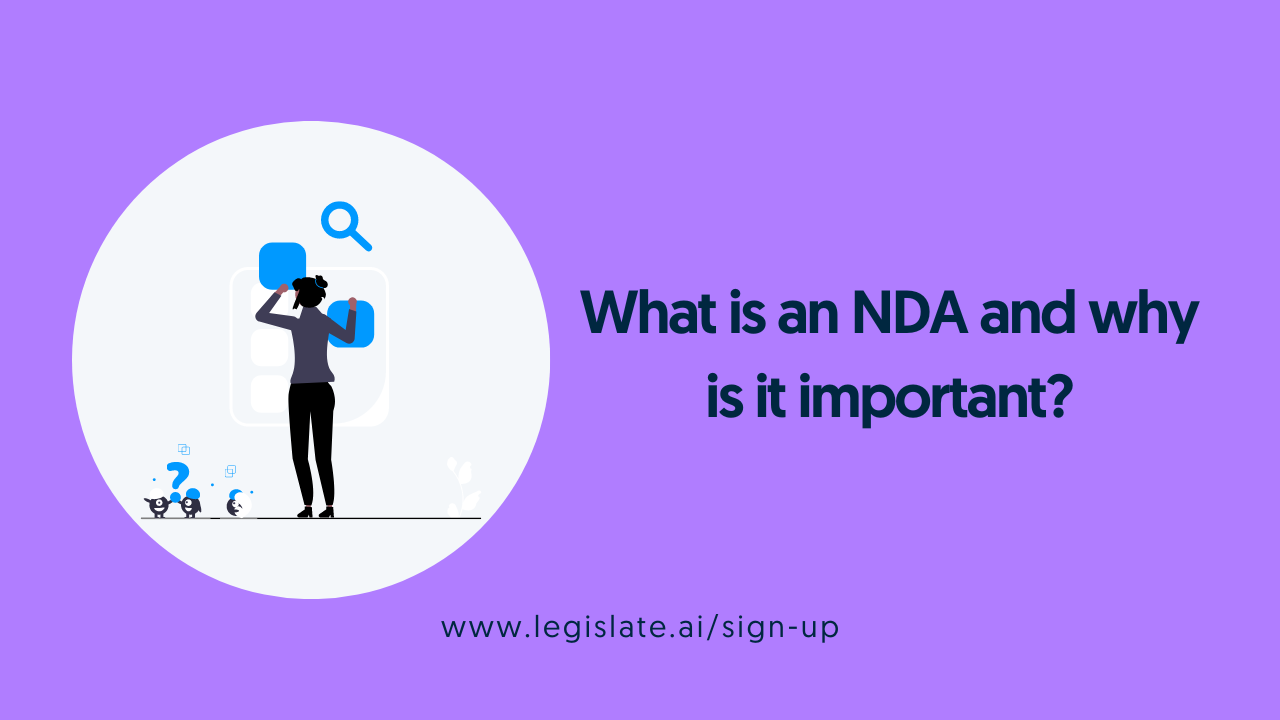 What is an NDA and why is it important?

This article explains what an NDA is and the benefits associated with using it. 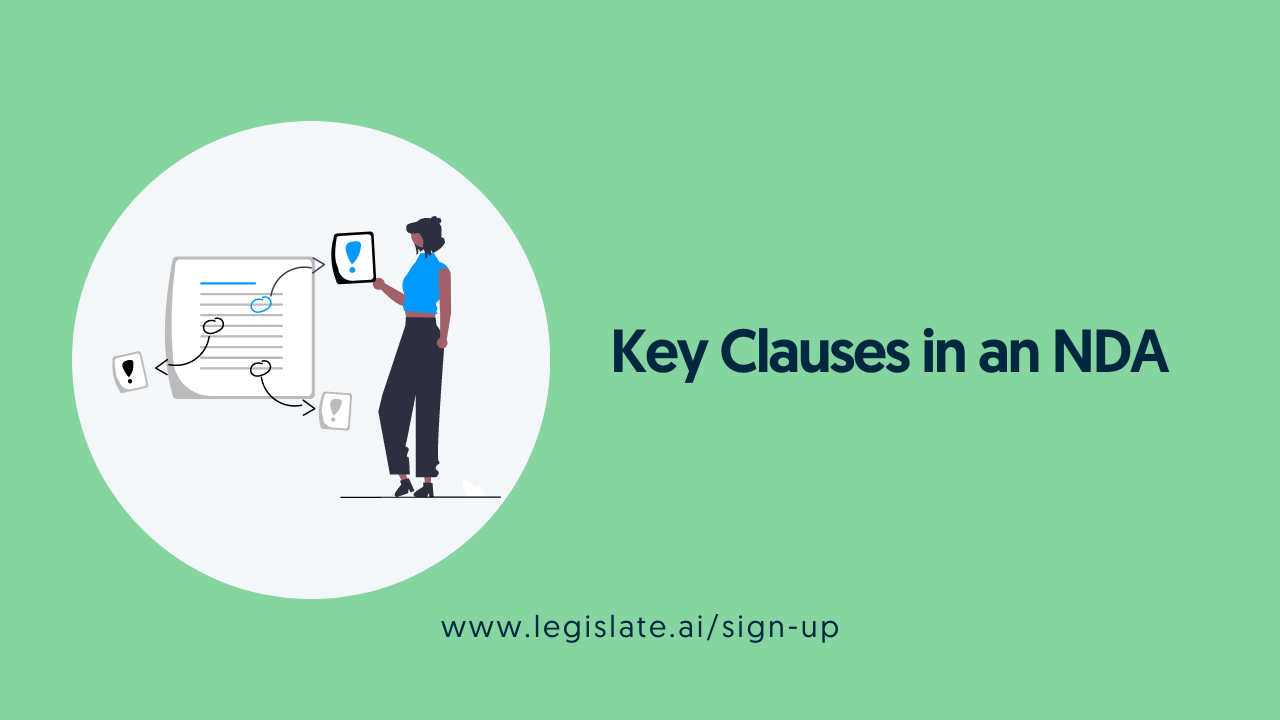 Key Clauses in an NDA

This article provides a detailed overview of the key clauses included in an NDA.